My Sexy Saturday--It's a Thriller!

Welcome to My Sexy Saturday! This week on the blog hop you'll find excerpts and posts on the topic of sexy "thrillers". Since I'd forgotten to post an excerpt from my brand new release earlier this month, I thought I'd thrill you with a slightly longer than seven paragraph snippet of what happens to lonely divorcee Shelby Schwartz when she reaches out and touches someone...in the dark. Talk about a thriller!
From my new paranormal/time travel erotic-romance new series The Time Surfer... Playing with the Past. 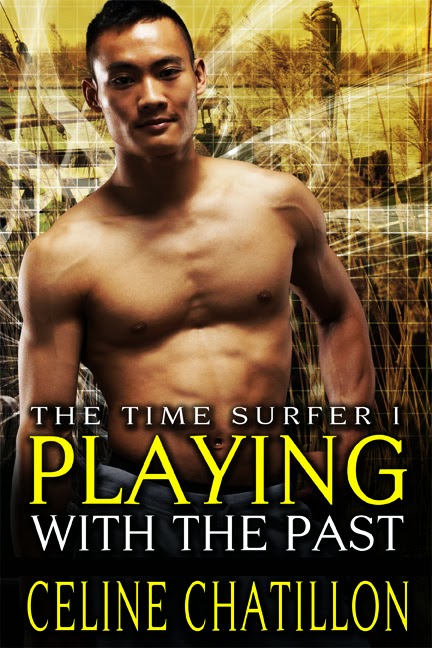 Playing with the Past
http://www.extasybooks.com/celine-chatillon/Playing-with-the-Past/


How can I say no to such a sexy man?

She screamed as she felt the warmth of a human hand instead.

“Who are y-y-you?” she stammered, sitting up in bed and reaching for the lamp switch. The stranger removed her hand from the toggle before she could switch on the light and cradled it tenderly in both of his.

“No need to be upset. I won’t harm you. I was just passing through, and I heard you moaning in your sleep. I figured you needed a little…help.”

Help. Yeah, that’s exactly what she needed—help to find her cell phone and to dial 9-1-1 before she ended up chopped into soup-sized bits in this maniac’s food processor.

“I…I didn’t realize my voice carried quite so well through these brick walls.” She slowly curled her legs beneath her, preparing to bolt from the opposite side of the bed, explode toward the exit and fly down the steps and out the front door before her visitor even had a chance to go for his machete. “Or maybe I need to replace the windows. Pity, since the contractor told me they were top-of-the-line.”

“Yes, they are. I can tell you’ve done a great job rehabbing this old brownstone. But don’t worry—it’s soundproof. I heard your sighs in my own dreams, and I surfed on in to investigate. This is St. Louis, twenty-first century?”

Shelby blinked and stared hard toward the man with the voice as smooth as silk kneeling next to her bed and holding her hands in the dark. She could only just make out his silhouette in the darkness—and what a silhouette it was!

“Twenty-first century?” she asked slowly and deliberately. Okay, maybe her visitor was just a plain ol’ delusional psycho and not a chainsaw murderer or run-of-the-mill rapist. If she could keep him talking, she stood a chance of getting out of this situation unharmed. “What century do you think we live in? The eighteenth?”

He tossed back his head and gave a deep, throaty chuckle. Its vibrations sent shivers of anticipation up her spine and directly to her aching clit. Whoa…with a sexy laugh like that, she nearly came listening to his resonant baritone. She wondered what would happen if she read comics out loud with him?

“Good one.” He sighed as his laughter gradually resided. “Your house wouldn’t be standing here in the eighteenth century. It’s about a hundred fifty years old.”

Shelby nodded slowly as her innate business radar clicked into gear. “You into fixing up old homes? I’m a real estate broker, and I can give you the scoop on a couple of real prizes in the neigh—”

“That’s not necessary,” he interrupted. He brought the back of her hand to his lips and kissed it. “I’m a traveler. I don’t really need a permanent home.”

She felt breathless at the touch of his full lips against her flesh. Trembling, but not out of fear or terror, she longed for him to press his kiss against her lonely lips.

“Why, everyone needs a home of some sort,” she babbled, trying to keep the intriguing stranger engaged in conversation, “a place to park your assortment of Cardinal baseball caps and treasured 1904 World’s Fair souvenir collection. Am I right?”

He chuckled again and gave her hand a squeeze, then let go. “Some do and some don’t.” She heard the squeak of the old floorboards as he rose to his feet. “Some of us enjoy wandering about eternity without a place to call home. We’re free agents—free to roam and explore without being tied down to a particular place…or time.”


Time. What was it about him and time? Shelby stared at the stranger through the darkness and tried her best to focus on his face, but the dim light of the moon through her sheer bedroom curtains wasn’t strong enough to help her discern his features. He seemed to be backing toward the door, readying to leave her. She sighed. Yet another example of how her incessant questioning had driven a good-looking man out of her life. But desperation and desire impelled her to ask one more.

“You never answered my question,” she interjected as he reached for the bedroom doorknob. “What century do you think you live in?”

Shelby could have sworn she heard a smile in the stranger’s silky voice as he answered, “Why, the forty-second, of course.”

Playing with the Past is now available at eXtasy Books:
http://www.extasybooks.com/celine-chatillon/Playing-with-the-Past/

The Time Surfer Part 2 -- Fooling Around with the Future will be released November 1, 2014. Stay tuned for details.
http://www.extasybooks.com/celine-chatillon/Fooling-Around-in-the-Future/