My Sexy Saturday: An Excerpt from Brandi Courts Disaster

Welcome to this week's My Sexy Saturday post. This week's theme is "My Sexy Boyfriend." Well, Brandi has more than one boyfriend, and she teaches them both a sexy lesson in my latest release from eXtasy Books... 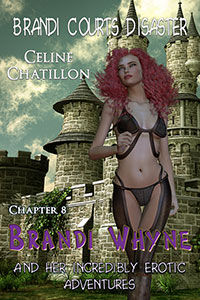 
Of course, born of humble birth, I was no lady. But I was all woman, deserving nothing less than their best manners.

“On your knees, you scurvy dogs. Now!” I grabbed the short whip off the podium, the one my teacher and lover Zelda had bestowed upon me before she left the Triple P. I gave the whip a good crack near their ears. They did as they were told. The crowd hushed and leaned forward, drooling with expectation.

“Be careful with that thing. I’m deaf now in that ear,” Willie moaned.

I strolled toward him and smacked the whip playfully across his buttocks. “Better?”

Willie flinched, but smiled. “Much better.”

I turned to Robin and noticed his serious expression and rigid posture. “Captain, you have assumed the correct position and seem ready to accept your discipline. Is that correct?”

“Aye, aye, Madam Ship’s Counselor. I will accept discipline as you see fit to give it.”

I leaned closer to him and rubbed my aching breasts against his shoulders. “You seem a bit too eager to accept punishment, Captain, which makes me a bit suspicious.”

That seemed to catch him off guard. He raised a dark eyebrow. “Suspicious? Why, I’m only trying to cooperate fully, madam.”

I took my nipples, which pointed through the thin silk of my poet’s shirt, and slowly rubbed them against his back. I was satisfied to hear his breathing increase in expectation. “You wish to demonstrate the wisdom in following orders and in not contradicting the officer in charge,” I murmured.

I quickly removed my shirt and tossed it aside, allowing my cut-out lace bra to force my bared breasts higher. The audience politely applauded. I then did likewise and removed Robin’s green top. “So, if one cooperates,” I began as I danced my nipples across the bare skin of his back, “one would hope to be rewarded for one’s obedience, yes?”

Robin moaned as he leaned back against me. “Hmm, yes, one would hope.”

Enjoy your My Sexy Saturday!