Seven for Seduction Now on Sale! 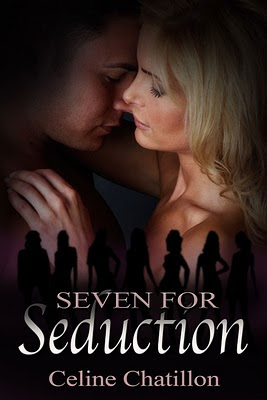 It’s here at last… SEVEN FOR SEDUCTION from Liquid Silver!

What’s a “token male” to do? Brent Davison finds himself stuffed with homemade goodies, herbal cures and attempts to sign him up to play a sport he despises. The only sane person in the all female office is his sexy cubical neighbor, Jodi Baker.

There’s no way Jodi will take her co-workers up on their wild bet to see who can seduce the mysterious Brent first. Let the others go for it—she’ll take no notice of him. Strangely enough, it’s Jodi’s leaving Brent alone that turns him on the most…

An excerpt from SEVEN FOR SEDUCTION:

“Brent, I have a confession.” Jodi put down her fork and looked straight at him. “I’m not really all that comfortable with the casual sex thing.”

He breathed a sigh of relief. “I have to admit that I’m not all that comfortable, either.”

“Really? Whew!” She smiled and wiped imaginary beads of sweat off her forehead. “That’s a relief… Then what the heck are we doing here?”

They laughed again and finished their dinner with more small talk.
At last, Jodi put her napkin down beside her plate. “Seriously, though. I feel as iflike I’ve been leading you on, Brent, and that’s wrong of me. I want to apologize. I will invest in a whole new office wardrobe–complete with burlap bags and face veils if it will make things easier for you.”

“Good grief, no! Never cover that beautiful face of yours. It would be a sin.”

“You think I have a beautiful face?”

She sounded doubtful, unsure of her own desirability, her own worth as a woman. It was that idiot who left her at the altar! He had wounded her soul. She felt vulnerable like he felt whenever Helena had made a casual comment about his lack of dressing skills or his unkempt hairstyle.

She needed his approval–not his rejection.

Instinctively Brent reached out across the table and pulled her into his arms. He repeatedly kissed and caressed her face as she sat in his lap, stroking her back while she rubbed herself against his stiffening erection, fanning the flames of passion between them.

“You are beautiful, Jodi,” he whispered into her hair. “Don’t let anyone ever convince you otherwise.”

“You’re not bad-looking yourself,” she murmured, returning his kisses with magical busses of her own. “I thought we said we both weren’t good at this casual sex business.”

“Who said anything about ‘casual’?”

And then before Brent fully realized what he was doing, he swept Jodi up into his arms and carried her into the bedroom…

Sounds interesting. Always should play hard to get.

Enjoyed the excerpt. Seven for Seduction sounds like a great read! :)

Thanks for the excerpt. I enjoyed it. Wondered about the title though. Why 7?
tamsyn5@yahoo.com