Voyages Around the Timeline 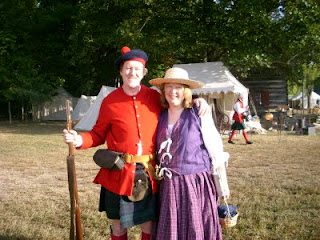 Yes, it’s been a while since I’ve posted a blog, but I really have a good excuse this month. I’ve been traveling around the timeline.... Literally! No kidding. I even have some photos to prove it. 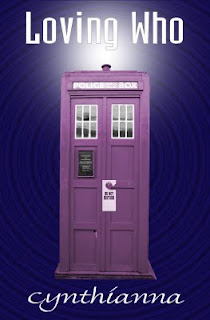 Before I forget, I’ll be traveling into the future the weekend of October 2-4 to Archon, a science-fiction convention in Collinsville, Illinois. I always enjoy meeting readers, fans and other interesting people at Archon, so be sure to drop in on one of the panels I’ll be on and introduce yourself. I hope to have some copies of my fantasy-screwball comedy, time-traveling novel, LOVING WHO, with me to sign and sell. (Keep your fingers crossed the publisher gets them to me in time.) 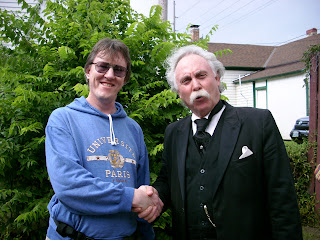 Other time periods I’ve experienced this past month include the pre-Civil War period in the “northernmost Confederate-sympathizing city” of Hannibal, Missouri. My husband, Adrian, and I even met and shook hands with Mark Twain “himself”. He’s looking great for his age. What a witty man—marvelously entertaining! Other sites of interest in the Hannibal area included eating at Lulabelle’s, a former bordello (it was in operation up until the 1950s) and touring not one, but two caves. Check out Hannibal for scenic views of the Mississippi and small town life as it was not so many decades ago. 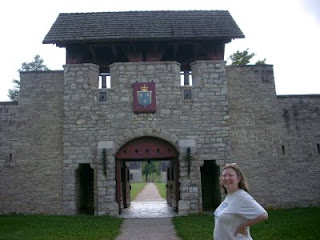 During Labor Day weekend, we visited two historic forts across the Mississippi—Fort De Chatres and Fort Kaskaskia. The first is a French fort built in the early 18th century that was eventually demolished by the British after the French and Indian War. It is partially reconstructed and stands as a testament to a long ago time when other powers ruled this part of the world. Just a few miles down the road stands the remains of Fort Kaskaskia, where Lewis and Clark recruited a dozen men to go on their Voyage of Discovery in 1804. The cemetery of the lost city of Kaskaskia lies nearby, a testament to the power of the river to completely wipe out Illinois’ first capital city in the later half of the 19th century. 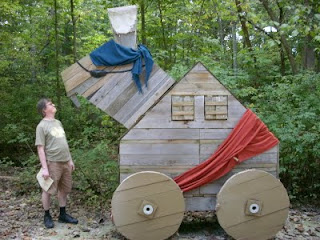 From the pre-Civil War period/early colonial era, we jumped back to the late 17th/early 18th century and the Spanish Main as we traveled to the St. Louis Pirate Fest up in Wentzville, Missouri. Yo-ho-ho and a nice pickled egg, me mateys! Pirate Fest has lots of fun entertainment from guys in short pants and more earrings than a jewelry store along with great music groups, such as "3 Pints Gone" and "Queen’s Gambit". We enjoyed food like “bangers and mash” and “jugged fish” while watching the pirates duke it out with the “French” of “Port Royal”. A family-friendly event, Pirate Fest is the last three weekends in September each year. Plan to come aboard! 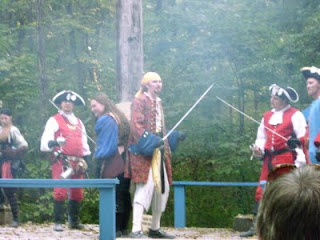 We hovered around the 18th century and then plunged the next weekend into the 1750s to experience the intense drama of the French and Indian War at Koh-koh-mah, a historic reenactment near Kokomo, Indiana. Primitive camping with plenty of wood smoke permeating your clothes and hair--ah! It was enjoyable weekend in spite of the fact there were no showers or flush toilets. But, hey! This is 250 years ago… You just put on more layers of clothes to cover your funk. I enjoyed wearing long skirts up until Sunday afternoon when a short rain shower broke, drenching the reenacting field and muddying the hem of my nice gown. 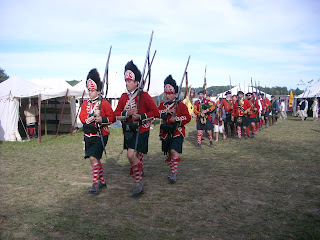 But there’s no crying in reenactment—there’s just mud and dust and grime and smoke and lots of fun discussing the lifestyle of the French, British and Native Americans of the era. Adrian had a great time portraying a 78th Frasier Highlander shooting his musket at those pesky French persons who tried to take over the fictional fort. In the end, the British prevailed. (Historically speaking, twenty years down the road, these very same Frasier Highlander soldiers would go on to exact a sort of Scottish vengeance against their English cousins during the American Revolution.) The saddest thing to come out of the French and Indian War, however, is that it soured relations among the English speakers and the Native Americans who had formerly been their allies. The tribes who aligned themselves to the two European superpowers essentially signed away any goodwill they once shared with the white frontier peoples. Many reenactors demonstrated Native American arts and crafts and social/family life at Koh-koh-mah. Without “living historians” how would we know about their rich culture? 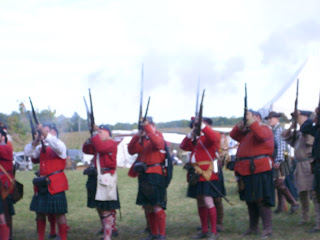 Another time travel stop we made this past month (alas, I didn’t have my camera!) was the Wilson’s Creek Battlefield near Springfield, Missouri. Site of one of the bloodiest battles of the early Civil War period, today it lies in a remote, quiet pasture of rolling hills and a bubbling creek… Hard to believe about 3,000 men lost their lives there on an August morning in 1861.

It’s fun being a time-traveler. I plan on using some of the great research I’ve done this past month in a future story or novel. I’d start writing it now if only I had the time--or a time machine!
Posted by Cindy A. Matthews at 9/26/2009 05:19:00 PM

Enjoyed reading about your travels. The photos are telling too.
JOYE
JWIsley(at)aol(dot)com

LOVE the pix Celine:)
As for my time travel, toured Ft. Christmas, FL. What a unique experience I got to see how people lived in the 17/1800's.
As for dream time travel I''d love to experience the 1920's flapper era.

Love the pictures. My time travel was to the renaisance era. Didn't get any pictures, but a good time was had by all, feasting on smoked turkey legs, yummmm! It was the annual renaisance festival here in
Kansas City from Sept. 3 to Oct
18th, they have different themes each weekend. My favorite part is the full armored joust to the death show. Lots of bloos shed when the bad guy is killed. LOL.