Will Write for Food! 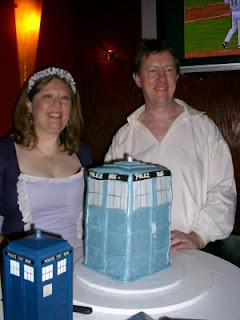 Our wedding cake was rather unusual... It was shaped like a TARDIS, the time travel capsule from the BBC series Doctor Who.

I was going to write a little something about my recent marriage to fellow author AJ Matthews, but he beat me to the punch. To quote my English-born hubby: “Ah, bugger!” No matter, I can always find another lofty topic to pontificate upon for this blog, right?

That last sentence proves that I am rusty and don’t have a clue what to write, doesn’t it? Sigh!

I confess I’m terribly out of practice. Think of me as a ballplayer who has been injured and set out on the bench all summer long… and I haven’t been called in to play until the very last play of the very last game of the very last championship series. It’s all up to me to knock one out of the ballpark and make a big “hit” to the adoration of the cheering crowds. Oh, dear… I swung and missed. My confidence has struck out faster than my vain attempts at fanning the air.

(Hmm, note to self: Do not attempt to be creative while listening to the Rolling Stones croon the classic, “Nineteenth Nervous Breakdown”. Yeah, it’s a catchy tune with a great danceable beat but still… It just reinforces the fact that I’ve not been able to write anything more than an email in quite some time now, and I’m terrified I won’t be able to write something coherent.)

You’d think being recently married to the most gorgeous, most charming and loving male on Planet Earth would inspire me to write some hot love scenes—and don’t think that it doesn’t—but unfortunately the demanding “day job” gets in the way. It’s either spend what little energy and free time I retain after toiling in the salt mines all week long with the new handsome hubby or completely ignore him and my need for sleep and write. I have chosen the former and not the latter.

Given the choice of which of the two—writing or the day job—to give up the answer is rather easy—I’d lose the day job in a flash if I could support the two of us on my writing. Unfortunately, even when I was fairly free to write full-time, I still couldn’t make a living of it. Sure, I could pay a few bills and go to a few writers’ conferences, but I couldn’t consistently pay rent or keep the heat on in the winter. And always I have this need to eat… Not a lot, mind you, but at least three meals a day, or I pass out from hunger.

So when there’s a choice of write and starve (and freeze) the two of us or stay and slave in the salt mines, you can see what decision I’m forced to make.

In the meantime, don’t forget to buy my books… I still have a few out there and every sale is appreciated. Thanking you in advance… and now it’s back to the grind. That salt doesn’t mine itself, you know!