Exciting news! Book 1 in the Seven for Seduction series, The New Guy, has won an Editor's Choice award from eXtasy Books. Here's what my editor had to say: 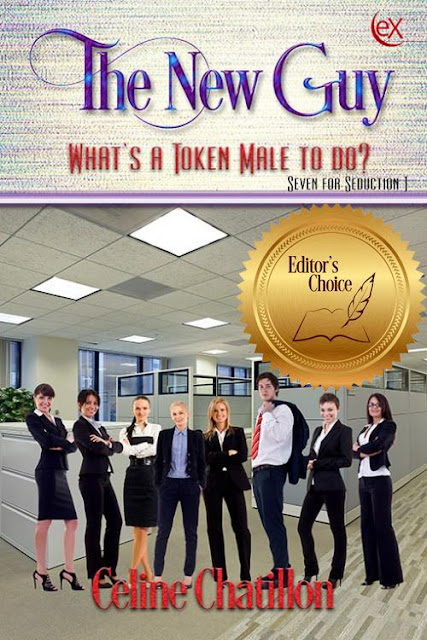 "Celine has a gift for pulling a reader into her worlds. This contemporary love story is no exception. The main story centers on an attraction that can't be denied, between Jaynie, the office lead, and Bryce, the new token male of the group. Office antics and competitive bets among seven women, co-workers and friends, add a fun and exciting backstory. The New Guy is the first in the trilogy Seven for Seduction, a true serial series. I recommend this book, and the series, with a smile." ~ Editor

Bryce finds himself the center of attention of an all-woman office. He finds sexy Jaynie's coolness attractive, but is it what she really desires?

What’s a token male to do? Bryce Davison finds himself stuffed with homemade goodies, herbal cures, and attempts to sign him up to play a sport he despises. The only sane person in the all-female office is his aloof yet sexy cube neighbor, Jaynie Baker, and he can't seem to fight his attraction to her.
Jaynie has had enough of men. Left at the altar, there’s no way she’ll take her coworkers up on their wild bet to see who can seduce the mysterious Bryce first. Let the others go for it—she’ll take no part of that bet. Strangely enough, it's Jaynie’s leaving Bryce alone that turns him on the most and increases their mutual attraction.

Can Jaynie win the heart of the new guy? If she does, can she find out what's really behind his distant demeanor to ensure a happily ever after? Will a second chance at love be a winning hand for them both?

An excerpt from the award-winning The New Guy:

Bryce caught her by the hand and spun her back around. She plopped butt first into his lap. He reached out and pushed the door shut with his foot.

“I don’t judge by outward appearances,” he said in a low whisper, his lips mere inches from her own, “but I can’t help but feel attracted to a beautiful woman sitting less than two feet away from me day after day. I’m human, you know. And a guy. We tend to think with the lower half of our bodies at times, and you’ve really got my lower half going gaga. I’m finding it hard to concentrate on my work because all I can think about when you’re in here, with your cologne and your curves, is how delicious you’d look after a long night’s lovemaking session.”

Jaynie felt her breath catch. Did Bryce say what she thought he said? Did he just tell her that he’d been secretly lusting after her all the while she’d been lusting after him? Maybe Raheesha was right. Maybe it was time for her to spill her guts and confess her attraction to him.

What could it hurt? They were both adults. They both knew how to keep a secret. Maybe if they acted on their libidinous impulses and got them out of their systems, they’d both be able to concentrate better on their work assignments in the future?

“Bryce…are you saying you’re attracted to me?”

“What do you think?” His lips danced along her temple as his hands moved across her hips and cupped her butt cheeks.

She took a shaky breath and closed her eyes. “I think you are.” She took another breath for courage. “I’m attracted to you, too.”

His feather-light kisses sent shivers coursing through her frame. “Really?”

“We’ve got to keep this a secret. If it gets out, the whole office will be buzzing about it. I don’t know what Mr. J would do.”

He playfully nibbled on her earlobe and the curve of her neck. “Probably nothing.”

She moaned softly. “How can we be sure?”

“We can’t, but he didn’t get on all your cases when you all were trying to seduce me before.”

Jaynie’s eyes flew open. “Whatever do you mean?”

Bryce laughed. “That first week or so after I arrived? Remember? Everyone in the cube farm was going after me like I was the last piece of meat on the planet and you all were a pack of starving carnivores. Except you, now that I think about it. Why was that?”

“Naughty girl." He gave a throaty chuckle. "You wanted me to chase after you. Is that it? Is that’s why you’ve kept me in suspense until now?”

“Uh-huh.” Jaynie sighed. Her hands roved across his strong, broad shoulders and caressed his face. Her lips longed to be possessed by his.

“So…what do you do after you’re caught?” He smiled wickedly.

She shrugged. “Accept my punishment for trying to run away like a good little girl?”

He raised an eyebrow. “Good answer. You’re saying you’re up for a little playtime after hours, with no strings attached. Right?”

“Right.” Jaynie shifted her weight and brought her lips in line with his. If a guy could enjoy unfettered, non-committed sex, then why couldn’t she?


The New Guy is now available at eXtasy Books, at Amazon and wherever fine ebooks are sold. 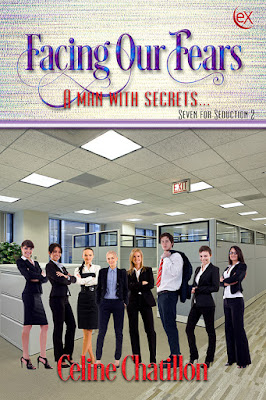 Thank you, AJ. It's quite a compliment, since it's coming from another Editor's Choice award winner. ;)