An Excerpt from Diplomatic Relations:Heavenly Bodies Book 3 (Adults only!) 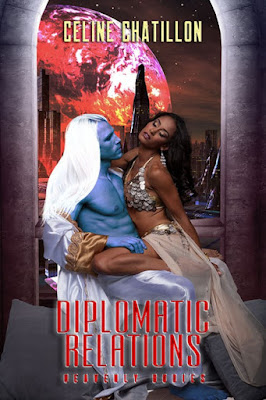 Career diplomat Cherae Longbow has heard the rumors. The Alliance of Peaceful Planets is desperate to make a good impression on its newest potential members, the Magnens of Magnus Prime. The High Commissioner tells Cherae her open-mindedness is an asset in this delicate situation, but it isn't until she and her team of young and sexually inquisitive aides view the first contact video does the truth of this statement hit home. The Magnens expect their allies to partake in their customary mass orgy in order to seal the deal on Alliance membership. Will Cherae be able to handle the  emperor and his entire high council and not risk a diplomatic incident?

“I’m going to miss how sweet and tight you are,” Brannigan murmured, pounding his hard rod into her pussy with practiced efficiency. His grasp on her hips held all the fervor of a drowning man clinging to a life preserver. “I’m going to miss hearing you scream and scream until my ears ring.”

“Yes, I’m going to miss that, too.” The rhythm of his thrusts increased He grunted his enjoyment of his efforts. “Promise me—promise me you’ll request the Valiant transport you and your team on your return trip home. Promise me.”

“I promise. Like I promise I’m going to scream so loud you’d better have your ears covered. Hold on tight. Fuck me harder, faster, faster…”

Her lips parted in breathless anticipation. She could feel the cries building deep within her, ready to reverberate throughout the ship.

Shivers of pleasure pulsed from her pussy outward. Cherae grabbed a hold of the safety bar mounted on the cabin wall to keep her orgasmic thrashing from battering them both against the bulkhead. The blood rushed to her brain with such a force that if in that second she died in ecstasy she wouldn’t care.

Brannigan followed her lead with a series of dramatic thrusts and a roar so loud she’d swear it could be heard on the planet surface several hundred miles below.

Diplomatic Relations is now available at eXtasy Books (and soon at Amazon and other fine retailers).
http://www.extasybooks.com/diplomatic-relations/

And don't forget to check out the first two stories in the series...