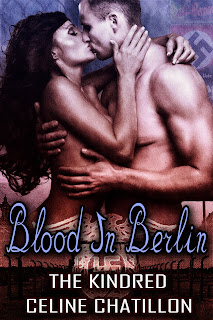 By Celine Chatillon
Book 3 in the Kindred series
http://www.extasybooks.com/blood-in-berlin/

In 1938 London, the vampire Edwin Carstairs attracts the attention of British Military Intelligence. A Nazi scientist known as Madame V is creating super-vampire-soldiers in Berlin and must be stopped. Edwin accepts the mission, hoping to prevent another devastating world war. But what will he and his team do when Edwin’s lost love Ophelia Jones is discovered taking an eager part in experiments that risk the very survival of human and vampire-kind alike?

An excerpt from Blood in Berlin: