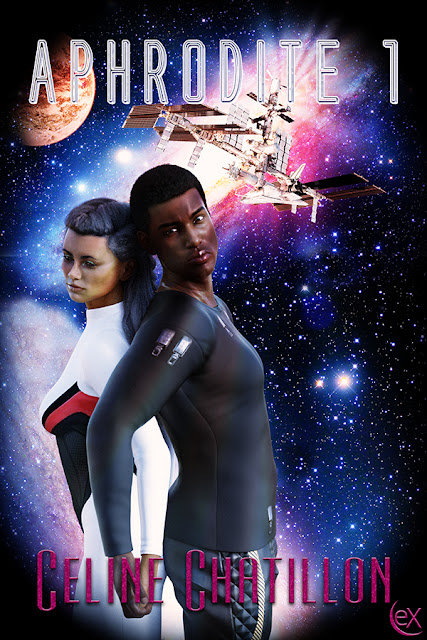 The crew of space station Aphrodite 1 finds romance, love, and danger—as well as a mystery—in the upper atmosphere of Venus.

Aphrodite 1 Life Sciences Officer Dr. Giselle Rosseau hasn’t lost a crew member yet—she’s not about to lose one now, either. Her first year aboard a space station orbiting the hot, desolate second planet hasn’t been all she hoped for, but she manages to work well under their less than friendly commander, Seth McCloud. After Seth’s a freak accident in the upper Venusian atmosphere, Giselle theorizes that perhaps their handsome comatose commander’s irritating stick-up-his-ass demeanor is a cover concealing a past heartache.

When Seth wakes and finds Giselle pleasuring herself by his sickbed, to her surprise and delight he wants to join in on the fun.  Suddenly lonely Giselle finds both her empty heart and bunk filled with a passion that can’t be denied.

Now everyone has a regular partner, and Giselle, Seth, and the rest of their playful crewmates can’t wait for Valentine’s Day. Seth’s increased strength and stamina since his accident is a mystery, but Giselle’s surprise a few weeks later is even bigger. What really happened to Seth in Venus’s upper atmosphere? Will it affect their future happiness together?

A hot excerpt from Aphrodite 1...

“Naughty boy enjoys his discipline too much,” Bettina answered. “We’ll have to think of another way to punish him. Alejandro?”

“Get your face out of Tomiko’s tiny twat and come over here. I have need of that cock of yours. Now.”

“Wow…It’s certainly getting hot in here.” Giselle hit the button on her tablet to close the Sick Bay doors and turned on some soothing music as white noise for her patient.

What to do for her own physical complaint? When all else failed, there was always your friendly hand.

“Oh, Seth. I…I don’t want to be the only one without a partner tonight. I hope you don’t mind.”

Giselle slipped off her pants, relaxed back into her chair, and slowly rubbed her clit in a circular motion. She gazed upon the sleeping form of their mission commander and daydreamed about what it could be like to handle that lovely cock of his. The temptation to rip off the sheet and lick him into shape and sit on his boner was almost more than she could bear.

Giselle arched her back and slipped a hand under her top, stroking a nipple until it stood proud.

“Hmm…We could have a good time together, Seth, if you could really let go of whatever causes you to have that stick up your ass—and you do have a very nice ass, if I do say so myself. What I wouldn’t give to fondle your great backside and rub myself against it as I passed you casually in a tight spot in the lower deck corridors. Ah, I could see it now, feel your hardness pressing against my butt cheeks as we switched places in the hall…Me pressing my curves against those hard muscles of yours. Ooh—ah!”

Giselle panted and climaxed before she realized how close she had been to coming. She gazed groggily over at her quiet companion.

“Well, you certainly know how to make a girl come just by lying there and looking handsome. It’s truly a gift.”

Giselle made sure his vitals monitor was synced to her tablet, before dimming the lights and heading to the mess.

“Where do you think you’re going?” Seth asked, just as she reached the doorway.

Aphrodite 1 is part of the Valentines on Venus collection and available from eXtasy Books as well as other fine ebook retailers.
Posted by Cindy A. Matthews at 2/11/2020 09:33:00 PM