Spice up your holidays! An Excerpt from Santa's Big Little Helper 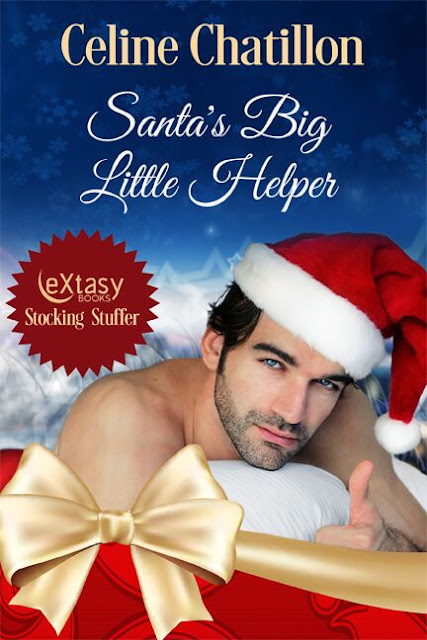 Be careful what you ask Santa for—you just might get it. Suellen confesses to an angelic hobo she's befriended on Christmas Eve that she lusts after the cover model on her romance novel because he reminds her of Carlos, a shy, handsome trucker who frequents her coffee shop. Santa's helper Carlos is given instructions by his friend Ol' Nick to make Suellen's dreams come true, and when Carlos finds out what they are, he can't wait. A little snow, a bearskin rug, and some fuzzy handcuffs make it a very Merry Christmas for the two lovers!

Excerpt: Suellen wakes up and discovers Carlos in her bed  Christmas morning.

Suellen took a deep breath to steady her nerves. Hmm…Carlos smelled of good honest sweat and soap and what all. She took another deep breath. That was a big mistake. The aroma of his aftershave mixed with the warm musk of a muscular male body made her head spin.

She could see him, feel him, smell him and, perhaps she could even taste him. This was the most realistic hallucination she’d ever experienced. What a way to come out of a hangover.

“You work for Santa Claus and not a trucking company?” she babbled.

“Both. I started working for Santa a few years ago in between driving jobs.” He chuckled. “His big little helper, he likes to call me.”

Suellen found her gaze wandering from Carlos’ bright grin to the big bulge in his Speedo. “Uh-huh. So, tell me…How many other lonely women have you helped this way for dear old Santa?”

He frowned as a cloud of hurt descended over his ebony eyes. His hands gripped her shoulders tighter. “You’re the first. I promise. I usually help Santa deliver gifts to illegal immigrants and others who hang out in remote places. I also travel along the river on Christmas Eve and give out gifts of food and blankets in the shanty towns.”

“What a wonderful thing, helping those less fortunate.” She relaxed slightly, but she couldn’t block out the effects of his masculine presence.

“Glad you approve and don’t think I’m a stalker.”

“No, of course you aren’t, and I didn’t mean to doubt you.” Suellen took a deep breath and regretted it. His spicy cologne scent possessed the same mind-numbing effect as the little hobo’s whiskey. “It’s just I’m usually not such a naughty girl. I mean, I’ve been on Santa’s good girl's list for years—so he’s told me.”

Carlos smiled. “Yes, he told me. It’s why he didn’t want you to be alone anymore.”