What I've been up to lately...

I apologize for not keeping up with my personal blog postings lately, but I've been busy editing The Bernie Blog, canvassing for the campaign, working on our Y.A. sci-fi series (the  first book, BloodDark -- Olivia's Escape releases in August), and  writing for another web site, Political Storm. Here's a sample of my writing lately which appeared recently at that web site. 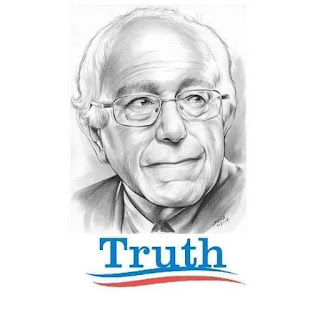 It’s not the style--it’s the substance. It’s the sincerity of his message. It’s that warm, empowering feeling of hope you feel whenever you hear Bernie Sanders speak. You sense his compassion for others whenever you listen to him. It makes no difference if you hear him in person at a “yuge” rally or streaming online from an alternative media source (since mainstream media has ignored him). All that matters is the message is directed at you, an ordinary American voter, and not at some billionaire corporate lobbyist or super PAC contributor.

Bernie Sanders doesn’t have a super PAC or even want a super PAC. He has been funded since day one of his run for office by us, ordinary Americans. His average campaign donation? Bernie brags at his rallies it’s “twenty-seven bucks!” We all laugh and applaud. The fact that he’s raised so much from so many through small donations demonstrates the affection millions of ordinary people have for Bernie. (We gave him $43 million in March alone.)We like him so much that we call him by his first name, and Bernie is cool with it.

The Millennials definitely think he’s cool. They design t-shirts with his face and slogans and tattoo their bodies with his icon. This will never cease to amaze me since their generation has been put through the grinder by the Baby Boomers’ selfishness and carelessness. Our kids inherit a polluted, climate-changed planet, and they’re desperate for the hope Bernie’s “A Future to Believe In” platform provides. But it’s not just about the excitement of the rally and the thousands upon thousands cheering on Bernie in large university arenas that provides hope; it’s the man himself.  Young and old alike connect with Bernie because he gives us the truth, straight up and unvarnished, and then he tells us how together we’ll make changes for the better and revive democracy in our great nation. 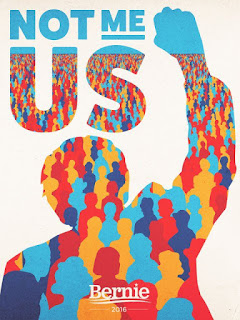 Our champion doesn’t come riding in on a white stallion--or even in a white luxury sedan--but he comes to talk to us in person and humbly asks for our support. We welcome him to our backyard barbecues with smiles and a cold beer. Folks who donate an average of $27 to a candidate can’t afford $353,400 tickets to fancy soirees with champagne and caviar and movie stars. We know we can’t afford to elect candidates who only want fame, power and more money for themselves, either. Fortunately, we have Bernie Sanders, a public servant who has served working Americans well through his long and distinguished career.

Bernie Sanders: A champion to believe in and a future to believe in. Somewhere up there you know FDR would be proud.

For more information about Bernie , please check out his campaign website at www.berniesanders.com or go to the all volunteer-created website bursting with useful information: www.feelthebern.org
Posted by Cindy A. Matthews at 4/06/2016 02:05:00 PM