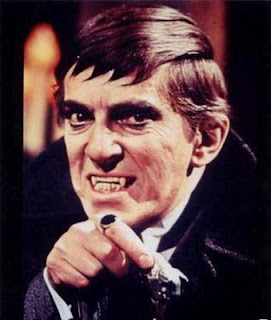 Jonathan Frid was the perfect vampire Barnabas Collins on the gothic TV daytime serial Dark Shadows. No one can replace him. He was intensely sexy, charismatic, dangerous and charming all at the same time.


Jonathan died on Friday the 13th at the age of 87. Looking back, I realize now that he was in his forties when he appeared on Dark Shadows from 1966 to 1971. No wonder I find middle-aged men sexy!


I'm not ashamed to admit that the character of Barnabas Collins was my inspiration for my hero Val Drakul in my best-selling novel, Help I'm Falling for the Vampire Next Door. There was a sense of vulnerability about Barnabas that was irresistible. He couldn't help it that he'd been turned into a vampire--it was Angelique the jilted voodoo witch's fault. He struggled with his blood thirst while he struggled to find love and happiness. It was the makings of the perfect tortured (yet strong and sexy) paranormal hero.


I was going to write more about the vampire tale I'm currently working on today, but my heart is breaking knowing my favorite vampire man is with us no more. Rest in peace, dear, dear vampire man.
Posted by Cindy A. Matthews at 4/19/2012 03:55:00 PM

Dark Shadows never aired in the UK, but from what I've learned since, it seems it had quite an impact on the vampire genre. Am I right in saying David Soul actually began his TV career on the show?

David Soul and Kate Jackson among many other TV/movie stars that hit it big in the 70s appeared on Dark Shadows. It really was a soap opera ahead of it time!

I love the moment Barnabas sees Victoria Wynter again after a long sleep. It's romantic and full of chivalry, just the way it should be. It is sad to know that hundreds of episodes will never be seen again, as they were not preserved.

Ooohh...a young David Soul...now there's someone I could sink my teeth into!

LOL @Rosanna! Yes, there were some very handsome actors on Dark Shadows. I think that's what made it fun to watch--because sometimes the sets or dialogue weren't all that great! ;)

I didn't realize not all the episodes had been preserved. That is the tragedy of the early TV era--not enough space to store the "reels" and the attitude was sort of "no one in the future will care if we keep this or not." I know a lot of fans would argue against this. I'm grateful that the era of the video/DVD has saved a lot of shows we'd otherwise never see.

I grew up with Dark Shadows, but until Barnabas was added I thought the soap would never last. I remember I just had my daughter when it was taken off the air. I watched the last show with tears in my eyes. I always had a crush on Barnabas. I think that might be why I am a vampire junkie today. I cannot get enough vampire romance novels!! I will miss him.

*Sniff!* I agree that the earliest episodes didn't share the same "spark" as the episodes with Barnabas did. It was definitely a bold move on the writers' part.

I couldn't believe it didn't last longer. General Hospital is still on, right? (That was my sister's fave next to Dark Shadows.) Why couldn't Dark Shadows have lasted forever? How can you ever get enough of vampires? :)

Me and my sisters used to run home or stop at my Aunt's house so that we would not miss an episode of Dark Shadows! Barnabas, Quentin and Angelic! Those were the days! I hope the remake is just as good, but it seems to be more humorous than anything!

We were only allowed to watch TV Friday night, Saturday and Sunday night. Exceptions in my house growing up was the news and football. Dark Shadows was the only soap that was ever watched and it was a treat because it was outside the norm.
Will miss Johathan/Barnaby.

Yeah, the new Burton film seems to be a parody of the genre and not a serious gothic romantic tale. I'm a bit sad, as Johnny Depp could do a great serious Barnabas Collins, IMO.

Dark Shadows will always be a favorite with its fans, no matter how other filmmakers conceive of it.

Being a fan of "Dark Shadows" and very sad when it finally ended, I was not happy to see that Tim Burton is doing his take on the series. No one can come close to the Barnaby character than Jonathan himself. Even though I was only in high school at the time. He was my first vampire crush. He will be missed. It's just one more thing from my childhood that is disappearing.

It's always sad to lose a beloved performer, but with 87 years to his credit, he lived a long life - and will be remembered fondly by so many of us!

I recall coming home from high school and watching the show while helping my mom with the ironing. I didn't watch much TV but that was a show I didn't want to miss!

I think Jonathan Frid was always surprised the way the fans reacted to his portrayal of Barnabas Collins on Dark Shadows. He probably didn't think he'd become a "vampire crush" when he took the role, but he certainly became one for many of us! ;)