Two Excerpts for the Price of One!

This week you get two excerpts for the price of one! 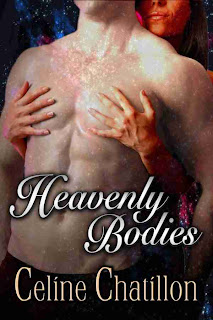 Outer Worlds Mining Corp miner Lelia Clayden lives for mail day. Her sexy mailman, Del Tourner, gives her reason to continue her lonely existence, but he’s unable to stay more than fifteen minutes at a time. Lelia orders a “PlayMate” holographic robot to pleasure her personally... What will Del think of how she’s programmed her PlayMate to look exactly like him?

Jenna Henson is a first rate sf geek, but even she knows the difference between fantasy and reality. Prince Reglund of her favorite TV show Galactic Guerillas cannot be the sexy hunk pleasuring her in her own bed. But what the heck? Why not give in to the fantasy and enjoy herself? It’s only when she wakes up on Reg’s home world does she begin to suspect there’s more to the television series than meets the eye.

Ambassador Cherae Longbow is nervous. She and her Martian assistant/lover, Jax, have been recalled from their diplomatic post to talk to the High Commissioner on Earth. Rumors have it that the Alliance needs to make a good impression on its newest potential members, the Magnens. But why does the High Commissioner keep mentioning that Cherae’s “open-mindedness” is an asset in this delicate situation?


Telepathic, non-humanoid aliens Mahla and Shahla find astronaut Frank Rimmer frozen in a cryo-statis chamber, the lone survivor of a deep-space asteroid impact on his vessel. The two make repairs to the damaged ship and do their best to help Frank to recover both physically and mentally…including transmitting images of gorgeous women they’ve discovered on a pin-up calendar into Frank’s mind for their appearances.


From the short story Diplomatic Relations:


Cherae put away her papers and unfastened her seat harness. She pulled her lustrous black locks over her ears before squatting between Jax’s legs to give his lengthy penis a good, deep sucking. Martians tasted different than Earth males, she had always thought. They were sweeter. It was like a licking a delectable, cock-shaped candy cane that she could never get enough of. Soon she had him writhing in ecstasy.

“You better sit on me fast, or I’ll rocket this spacecraft back to the moon,” he warned, pushing his seat all the way back.

She deftly tickled his pinkish tip with her tongue. “How romantic. You definitely have a way with words, Jax.”

Cherae accepted a hand up. Jax quickly removed her thong as she floated above him. Hooking her feet beneath the armrests for leverage, she impaled herself on his cock, gasping with delight as her pussy muscles clenched about his thickness. She ratcheted her hips in a slow and sensual corkscrew motion. Jax yanked down her jacket zipper freeing her full, round breasts from captivity.

“I want to suckle on your tits from now until the end of time.” Jax groaned, lathing his tongue around her tender points, bringing them to upright attention. “I want to make love to you until all the stars supernova.”

The heat between them grew with each thrust on his cock and pivot of her hips. It wouldn’t be long until she’d feel the shudders begin low in her belly, Cherae knew, spreading outward along her limbs, encompassing her total being. But suddenly she remembered that she was a career diplomat with an image to uphold. She couldn’t just shriek and thrash about wildly on a crowded shuttle flight like she usually did as she orgasmed. She had to remain in control.

The sound of a couple doing exactly as Jax just described echoed throughout the cabin. Cheers and catcalls followed—along with several more boisterous lovemaking cries. Cherae shook her head and tried to pull back, but he would have none of it. He drove his cock deeper into her yet.

“No, I’ve got to preserve decorum,” she said, panting. “I’ve got to follow protocol. I can’t just… just…”

Jax suckled her nipples without mercy until she felt like screaming. She bit her lip but the pain couldn’t erase the intensity of the pleasure he gave her. His thrusts grew her harder and faster with a hammering cadence that could only cease with his release. She gripped his shoulders as the start of uncontrollable tremor threatened to engulf her, threatening to scramble her brain and raze her sense of modesty forever. Batting the blanket away from her face, she tilted her head back and cried, “Oh, yes! Harder, please. Fuck me hard… Oh, oh… Yes!”

Their cover floated away in the zero-g environment along with Cherae’s flowing black mane. Her pointed breasts rose, glistening with perspiration, glowing golden in the cabin’s soft light. She felt as free as an eagle soaring over the plains—wild like an animal in heat.

From the short story PlayMate:

Lelia stood back from the unit and licked her lips in anticipation. There was a sharp burst of static and then the blurry image of a man began to form. The mahogany-colored body that lay across the workbench possessed Del’s characteristic smile, handsome facial features and long-fingered hands, but little more.

“Shit. I guess since I don’t have a vid of him naked, the persona program isn’t certain of how to form the rest of him.”

Lelia sighed and hit the scan button on the comp console. “There’s got to be some protocol on how to proceed if this is the case… Ah, here it is, ‘What to do if you have insufficient data to program a customized persona’. That’s what I need.”

She hit the enter key and the disk droned, “If all you have is a clothed image of your special persona, PlayMate can help you develop its other body features with some input about your personal tastes.”

She sat back and scratched her head. “Small, medium or large? Good grief. Should I go for large? How large is large? I wonder what ‘custom-sized’ means?”

Scanning the instruction disk again she discovered what a custom-sized cock meant. “A penis that is in proportion to the rest of the individual’s body based on measurements of hands and feet. Good. That sounds about right. It’s not the size that counts anyway, but how it’s used and whom you’re using it with. And the vids show Del’s hands quite well. I can tell he wears a good-sized boot, so I’ll input that data about his shoe size…”

The blurry image materialized on the workbench. Lelia gasped, clapping her hands. “Oh, my… He’s perfect!”


“I’m ready for your instructions, mistress.” Del’s holographic clone sat up on the workbench like a wooden puppet an hour later, speaking in a rather flat monotone. The thing certainly looked like Del—and it sounded like Del—but something was definitely missing.

“Hang on there a moment, big boy. I need to tinker with you a bit.”

Lelia scanned the recent vids to see if she could discover the missing element. She played back their last conversation, and immediately knew what was needed.

“Add various laughing tonal variations as demonstrated by Del Tourner to PlayMate,” she instructed the comp. “Add grinning features as well.” She sat back to observe.

A low, throaty chuckle immerged from between a bright flash of teeth. He stood and took a step toward her, fondling his growing erection. “I’m ready for your instructions, mistress. Are you ready for me?”

Lelia gulped and nodded. She couldn’t wriggle out of her work overalls fast enough.