Take a bite of the VAMPIRE NEXT DOOR...


To celebrate this weekend's festivities, here's a bite from my best-selling novel from Liquid Silver Books, HELP! I'M FALLING FOR THE VAMPIRE NEXT DOOR... 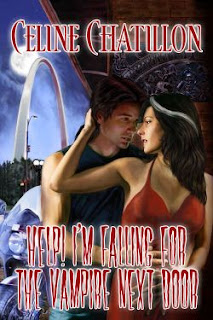 Valentine Drakul longs for a mate, someone to share eternity with who won’t be totally grossed out living on a diet of steak tartare. Could the sexy girl living upstairs fulfill his every fantasy?

A deadly foe ensnares Mel in his evil plot to rid the world of the Kindred race... Can Val save the mortal woman he loves without transforming her into the eternally lonely being he's become?


Excerpt Set-up: Mel returns from a dinner with the villainous Leo Van Helsing...

“Where in the world have you been? I’ve been looking for you everywhere.”

Val stomped out of the dark, moonless shadows, grabbing Mel by the elbow as she approached the warehouse’s front door at half past eleven. “And what were you doing all this time riding in a limo?”

“Jealous?” Mel giggled. “It was nothing. Nothing at all. Shelby wanted me to schmooze with some bigwig client so he’d buy into the building. I think he will, too. Shel is going to be sooo pleased with me.”

Mel reached into her purse and dropped her key then fumbled with the front door lock. “Oops! I think I’ve had too much to drink.”

“It appears so.” He picked up the key along with a matchbook that had fallen beside it. He gave a long whistle. “Whoa. That must have been some major player you had dinner with. You actually ate at the Adam’s Mark Hotel?”

“Did you give him dessert upstairs afterward?”

She frowned. “Just what are you implying? Oh, that I... No, no. He was a gentleman. A very handsome, very rich and well-connected gentleman. There was no hanky-panky whatsoever. I think.”

The fires within him roared. Val grimaced and clenched his fists at his sides. Another had staked claim to one of his own. That man must die and die horribly. Instinctively his canines grew, forcing him to turn back into the shadows.

“Val, your face!” She gasped. “I’m not all that intoxicated. What’s wrong? You look like you’re experiencing a sudden toothache. Are you all right?”

“I’m fine. It’s my wisdom teeth. They give me trouble.”

Mel approached him and cradled him tenderly into her arms, patting his back.

“Poor baby. I bet they hurt awful. I noticed the gum swelling the other night after we... made love. You really ought to see a dentist.”

“How many dentists do you know offer late night hours?”

She chuckled. “I promise not to shout too loudly if you won’t.”

He lifted her up as easily as she were a phantom without substance and took her deeper into the shadows, pinning her against the cool brick wall with his hot cock, madly ramming it harder and harder into her tight passage. His mind went blank and his canines extended. He lightly raked them against the tender flesh of shoulders, drinking in the perfume of her blood. He teetered close to the edge of insanity.

Mel sighed. “Oh, Val, you know exactly how I like it… Fast and hard. And that is the most wonderful sensation on my neck. Bite me, will you?”

“I said give me a hickey. It won’t show if I wear a turtleneck for the next week or so. You’re driving me crazy with your nibbling. I’m about to... I will if you...”

“Melynda, I can’t bite you. If I did, I’d...” He couldn’t say the words I wouldn’t stop until I had drained you of all your blood.


Help! I'm Falling for the Vampire Next Door
from Liquid Silver Books


What sort of excerpt would you like to read next week? Funny, scary, sexy, all of the above? Let me know in the comments below, and I'll try to oblige.