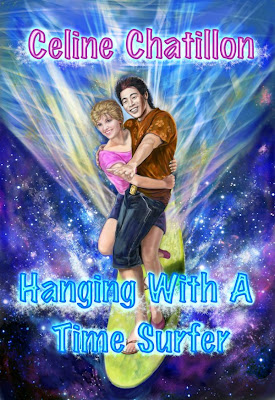 Allrighty… About the new release from Liquid Silver Books Hanging with a Time Surfer… Where do I begin?

Do you want to know where I came up with the title for the story? Okay, we can start there. The title began out of nowhere actually. I had said something to someone at LSB that my first release with them, Help! I’m Falling for the Vampire Next Door, would be followed up by a sequel with an even longer title! (Such a little devil, I am, aren’t I?) Well, our web guy Mike warned me that “Vamp Next Door” had already broken the web site with its mile long title, so I decided the next book title would be a tad shorter. I had my hero in mind already (a time traveler). I wanted to come up with a title just as funny as the first book’s in the “series”--another thing I came up with on the spur of the moment. Boy, am I ever growing “spontaneous” in my old age! —so I came up with “Hey, I’m Hanging with a Time Surfer”. I was told it was a few characters too long. Oh, dear. So it eventually evolved into the form you see today on its terrific cover.

(I have been blessed with two terrific covers here at Liquid Silver Books. Many, many thanks to cover artist Lynn Perkins and to April Martinez, art director. You ladies rock big time in my humble opinion.)

Let’s see, what’s next… I came up with the title and the hero and now I told everyone this was a “series”. Great. Why do I put myself into these pickles? I had to have a heroine… and the only woman I could think of to take out of “Vamp Next Door” was Melynda’s cousin, Shelby. Oh, dear—I had made Shelby a married woman! That wasn’t going to work out in a new romance with a time traveler… I had to get rid of her hubby. It actually wasn’t too hard, as Shelby had only mentioned Graham in passing in the first book, and Mel had intimated that he was somewhat of an obsessive-compulsive business type who couldn’t stand anyone who left the toothpaste cap off! So, Graham runs off with a cocktail waitress, leaving Shelby man-less and a bit unsure of her own sexuality at the story’s opening. Who could ever love her since she’s been dumped? Poor, poor Shelby!

I couldn’t let this poor chick (well, Shelby’s not poor actually—she’s practically a millionaire) sit around and mope in Saint Louis about her two-timing husband. This is the perfect opening for Quentin Takahashi, our intrepid “Time Surfer” from the 42nd century to make an appearance in her life. Quentin sweeps Shelby off her feet and takes her on a time-traveling, sexual odyssey that pulls Shelby out of her funk and makes her focus on what’s truly important in life. (Hint: It’s not selling lots of real estate like she thought it was; that’s for sure!)

Where all do they travel in time and space? I decided to take Shelby and Quentin to a couple of fun periods in Saint Louis history—to “medieval times” and the lost city of Cahokia and to the tense period during the Civil War when the Union held the city (although a majority of the residents were Confederate sympathizers). After that, I thought they could sore off to another planet in the future—as I had to figure out how I was going to introduce my next paranormal hero for third book in the “series”. (Oh, this spontaneous urge really was putting me through my paces!) And who is this next hero? The answer to that secret will have to wait until you’ve read the book!

(*Blushing*) Um… I will only say in my defense that I have an overactive imagination and figured that Shelby really needed to expand her horizons a bit. Quentin, coming from another time period and culture, sees no problem in allowing Shelby to experiment with various sexual techniques and partners. It is his acceptance and love that allows her to have these experiences and to learn and grow from them. Quentin is the ultimate hero—no hang-ups, no jealousy (all right, just a little) and he always has Shelby’s best interests at heart.

What else would you like to know about Hanging with a Time Surfer other than it’s a Molten release (for all those naughty, kinky sex scenes)? Where to buy it? Ah ha! I knew I forgot something... So here's the purchase link:

Enjoy! And tell me what you think.